On May 14, 2015, three time Grammy nominated blues harmonica player Billy Branch with Dan Carelli (playing a resonator guitar) gave the audience a preview of what to expect at the upcoming 2015, Chicago Blues Festival. Admission was FREE as part of “Speakin’ of the Blues: Celebrating the Willie Dixon Centennial”. The venue was the comfortably sized "Cindy Pritzker Auditorium" at the Harold Washington Library Center in downtown Chicago. The acoustics of the theater made it perfect for the event. Learn more ... 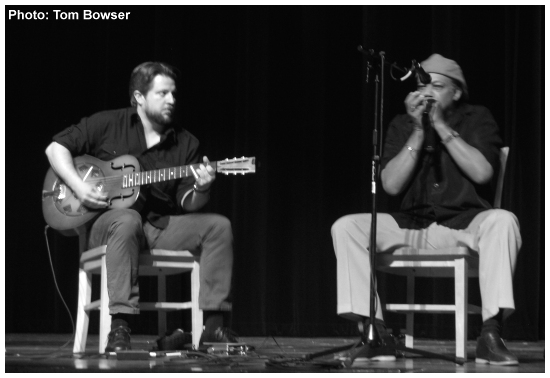 The Chicago style of Blues music has influenced many other genres of music and internationally famous musicians to include blues rockers Jimi Hendrix, Jimmy Page of Led Zeppelin, Stevie Ray Vaughan, Eric Clapton, ZZ Top, Keith Richards of The Rolling Stones, David Gilmore of Pink Floyd and many more.

The Chicago Blues Festival is one of the largest FREE blues festivals in the United States. It is an international event attended by people from around the world. If you have not been to Chicago for a while it's time to plan a visit. See you there! Enjoy music, enjoy life, be kind to others. Tom