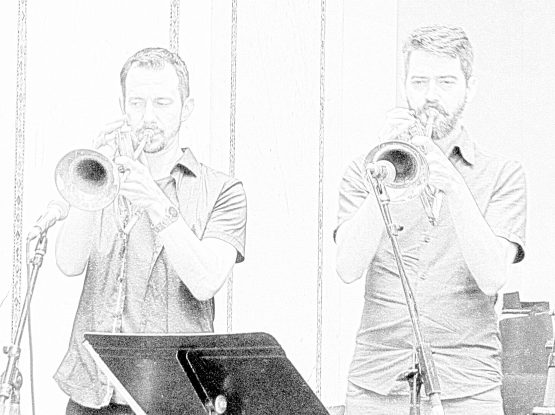 Thursday, September 3, 2015 from 2:00 to 3:00 p.m., the first day of the 2015 Chicago Jazz Festival. James Davis and his band Beveled was the second act of the day at Preston Bradley Hall in the Chicago Cultural Center. This was the first time my wife and I had the opportunity to see James and Beveled perform. We will definitely make time see them again in the future.

The instrumentation the band uses is interesting. James Davis and Chad McCullough both play the flugelhorn as lead instruments. I first became aware of the flugelhorn when Chuck Mangione released his album "Feel So Good". For those of you who are not familiar with the flugelhorn, it looks similar to a trumpet or coronet, but is a bit larger and mellower sounding. Mike Salter and Geof Bradfield added rich bottom end to the bands musical arrangements playing bass clarinets. Forming the bands solid foundation were Dan Thatcher on double bass and Juan Pastor on drums.

James and Chad played wonderfully together. They took the flugelhorn in a different and worthy direction from how I've seen it previously used in jazz. The band was tight and well rehearsed. The bass clarinet is an instrument I've rarely seen used in jazz. It definitely has a home in jazz and the bands compositions.

The cool thing about James Davis's band Beveled is it's depth of talent. Chad McCullough and Juan Pastor both front their own talented bands. Look for Geof Bradfield in Chad's band where he plays the sax instead of the bass clarinet. He is also a talented sax player.

James Davis and Beveled has a new CD available (at the time I wrote this article) entitled "Beveled". See the James Davis Web site for more information.

The band:
This image below of Juan Pastor was taken later in the day when he played the Jazz and Heritage Pavillion (North Promenade) at the 2015 Chicago Jazz Festival.

The Chicago Jazz Festival is one of the largest, high quality, FREE jazz festivals in the United States. For a listing of other great free things to do while you visit Chicago go to InspiredChicago.com