It was day 3 of the 2015 Chicago Jazz Festival in the Jazz and Heritage Pavilion. This was the first time my wife and I had the opportunity to see Makaya McCraven's Quartet. We had seen Makaya as a member of the Marquis Hill Blacktet when they performed for the Chicago Sound Pallette III. Marquis Hill and the Blacktet gave a fantastic performance that night. My wife and I were both impressed with Makaya McCraven's precision and attention to detail as the drummer of the Blacktet. 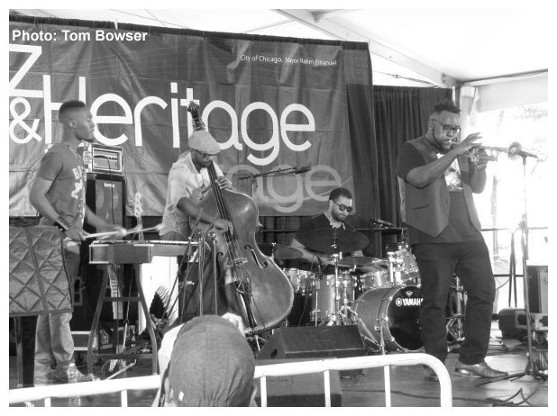 Makaya McCraven's Quartet included two familiar and talented players from the Blacktet including trumpet player Marquis Hill (winner of the prestigious Thelonious Monk International Trumpet Competition) and Justin Thomas on vibes. Marguis Hill plays with an intensity that makes him one of my favorite trumpet players in the Chicago area. Justin Thomas was killin it even more than usual on the vibes during this show. Justin will be playing at the upcoming Hyde Park Jazz Festival on September 26th, 2015 here in Chicago.


The quartet also included bassist Junius Paul and guitarist Jeff Parker. The addition of Junius and Jeff added a different vibe to the groups sound from that of the Blacktet making it worthwhile to see both bands if you have the chance. My wife and I enjoyed the show!

Makaya's drum solo toward the end of the show demonstrated why he is one of the top drummers in Chicago. Make time to see Makaya McCraven's quartet when you have the opportunity.


The Chicago Jazz Festival is one of the largest, high quality, FREE jazz festivals in the United States.