The free Chamber Music Concert Series at the Chicago Cultural Center has been evolving to include a wider variety of music. I like the change as it allows me to experience a diversity of music styles and genres that I might not otherwise be exposed to. The band scheduled to play on December 14, 2015 was "Ask Your Folks".

Ask Your Folks showed they had more than just a clever name. Their musical style seemed influenced by both jazz and folk music. Their clean, well rehearsed performances demonstrated their classical music roots and DePaul University music school training. 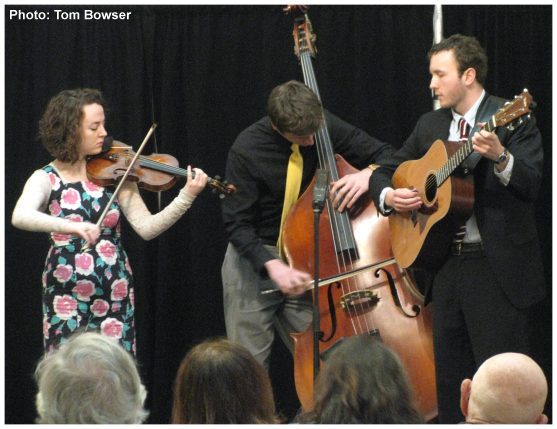 One of the standouts for the show was the violin playing of Libby Burton. Her playing style and clean tone gave a modern feel to a genre of music rooted in the more organic feel I associate with fiddle players. I'm sure that with continued work Libby's vocal abilities will rise to the level of her violin playing. Owen and Eli played well together and formed a solid foundation for the original compositions Ask Your Folks performed.

The sound production for the event was well done. The overall volume was good for the room. The mix between instruments and musicians was well balanced. The overall sound had excellent clarity. The band did a good job working with the single mic technique used to reproduce the musicians vocals and instruments.

My wife and I both enjoyed our lunch hour all the more while listening to the music of Ask Your Folks. I suggest you make an opportunity to see their next performance. The show was another great free event sponsored by the folks at the Chicago Department of Cultural Affairs and Special Events (DCASE)

The band Ask Your Folks is ready to fill the role as an opening band for a larger tour. Looking to hire "Ask Your Folks" for a corporate event, party, wedding or festival? For bookings contact the band at askyourfolks at gmail.com.