Toronzo Cannon performed in the Chicago Cultural Center as part of a series of FREE Chicago Blues Festival Preview Events.

I'm not originally from Chicago, but moved here with my wife a few years ago. I had never heard of nor seen Toronzo Cannon perform prior to this concert. It was a great show! The band was tight, professional and well rehearsed. Toronzo is not only a good guitar player, but a good performer who knows how to engage with his audience while he performs. For me a live show has to bring more than just a band playing music. I can put on a pair of headphones and listen to music at home if all I want to do is to listen to music. Toronzo Cannon and his band "bring it" with style. 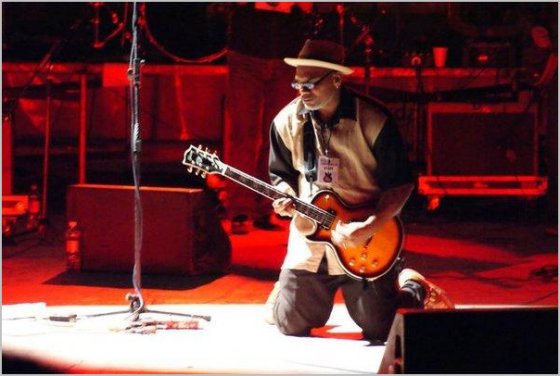 Toronzo Cannon grew up in Chicago. The Chicago style and sound of blues undoubtedly flows through his veins. However, I detect the influence of two great non Chicago guitarists on Toronzo's guitar playing, For example, the tone of Toronzo's guitar and amp combination at this show were clearly influenced by the late, massively talented guitarist from the great state of Texas, Stevie Ray Vaughn.

My wife and I both noticed the diversity of people at the show. Black, white, brown, Asian, young and old from teenagers to people in their 70's and even 80's. Dancing, grooving, swaying to the rhythm of the blues. Blues music talks about life. It tells stories that we can all relate to in one way or another.

I'm NOT a writer, critic or photographer. Though I've worked professionally in the production side of music I am a music fan first and foremost. I only write about performers that I think are worth seeing from the perspective of an audience member. See Toronzo Cannon and his band. You will enjoy the show! Toronzo is currently now signed with Chicago based Alligator records.

My wife and I also attended the FREE Chicago Blues Festival preview event "Speakin’ of the Blues: Celebrating the 45th Anniversary of Alligator Records with Bruce Iglauer and Lil’ Ed". Bruce Iglauer is the founder of Chicago's Alligator Records. Lil' Ed is the front man and guitarist for Lil' Ed & The Blues Imperials. Lil' Ed appeared without The Blues Imperials and played a few solo songs using slide guitar. Great stuff! I now consider myself a "Little Ed Head". I'll write more about this event at a later time.