NOTE: If you plan to attend a Juan Pastor, Chichano performance be sure to arrive early. The venue was filled to capacity with people standing along the sides the day we saw them.

Day three of the Chicago Jazz Festival at the Jazz and Heritage Pavilion (North Promenade). Our exploration of the 2015 Chicago Jazz Festival continues. My wife and I saw Juan Pastor perform with James Davis's band Beveled. Juan Pastor's performance with Beveled demonstrated his talent as a drummer. We decided we needed to see him perform in his element as a drummer and percussionist playing Latin influenced jazz.

Juan Pastor is an entertainer as well as a good musician. His enthusiasm for making music propelled the band and enthralled the audience. The band was tight and well rehearsed. I liked the well planned interaction between Patrick Mulcahy on Double bass and Stu Mindeman on Piano. Stu Mindeman's piano playing was perfect to round out Chinchano's sound. 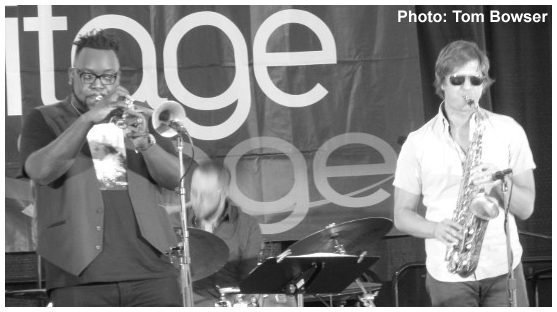 
The technicians who work behind the scenes to make any live music event happen rarely get the credit they deserve. Producing live sound is a challenging job. The sound company that produced the live sound for the Chinchano show did a good job producing a quality mix at a comfortable sound level. Nice work guys!

The Chicago Jazz Festival is one of the largest, high quality, FREE jazz festivals in the United States.