It was yet another beautiful early fall day in Chicago. A perfect day to listen to world class jazz. My wife and I both especially enjoy events that are held in some of the smaller more intimate stages & spaces used during the Chicago Jazz Festival.

James Sanders and Proyecto Libre played at the Von Freeman Pavilion (South Promenade). It's a medium sized tent. Seating consists of both benches near the stage and chairs further back. The sides of the tent can be opened or closed depending on the weather. Today the sides of the tent were open allowing a light, comfortable breeze to refresh the space. Ample, clean bathrooms are available on both the left and right sides of the Pritzker Pavilion main stage which is a short walk from the Von Freeman Pavilion. Walk about 1 block west (opposite beautiful Lake Michigan) and you're on Michigan Avenue which has a variety of restaurants and shops. (Click on a picture to view a larger version.)

My wife and I moved to Chicago. One of the many things we like about Chicago is the diversity of people, languages spoken, foods and cultures that call Chicago home. James Sanders’ music reflects the diversity of the people and cultures that makes Chicago the great city it is. James Sanders grew up in Chicago. His mother was from the Dominican Republic and his father was born in the United States.

James Sanders playing style and sound is uniquely different from his early inspiration Johnny Frigo. James Sanders has a modern feel with a Latin American flavor that makes him unique when compared to other jazz violinists. His playing is improvisational and rich in emotion. 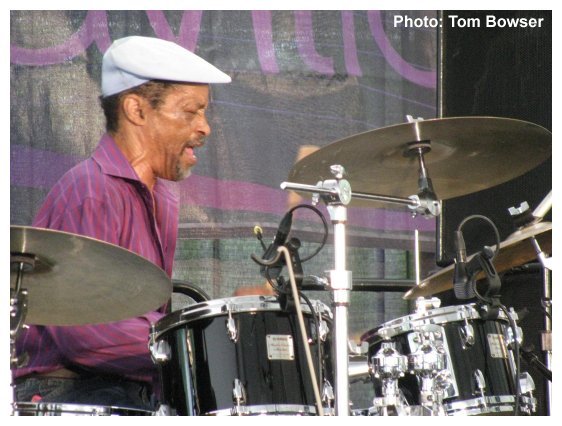 The joyful drumming of Avreeayl Ra and solid bass playing of Joshua Abrams kept the rhythm of the band tight. Joshua Abrams is a talented basist. I've seen him a number of times in different musical ensembles. On a number of occasions the sound techs running the live sound have had problems mixing Joshua's bass sound. A big part of the problem is his bass is often reproduced using a EV-RE20 microphone placed at or around the F hole of his bass. This microphone position produces to much emphasis on the low frequency range at the expense of the clarity, articulation and attack that should be present in the missing mid frequency range of the reproduced bass sound. The result is his bass tends to sound a bit boomy in the low frequency range. Not Joshua's fault. Also, as he moves while playing his bass, his bass also moves relative to the mic. The change in position alters how the microphone reproduces the tone/sound of his bass. Joshua's bass would sound better if he had a statically mounted pickup or microphone. This would improve the consistency of his bass sound when played through live sound systems.

My wife and I both liked the interesting feel that bassist Harrison Bankhead added to the music. The conga playing of Jean-Christophe Leroy added the final latin touch to the soundscape created by James Sanders and Proyecto Libre. Lastly, a standout in the band the day we saw them was the saxophone playing of Edward Wilkerson. (Click on a picture to view a larger version.)

If you like improvisational jazz you will enjoy the unique approach and sound of James Sanders on electric violin and his solid, talented band Proyecto Libre. My wife and I both enjoyed the show.

NOTE: I took pictures of all the members of the band as I always do. Unfortunately not all the pictures turned out well and some had to be omitted. Sorry guys!