My wife and I let the sound of the drum guide us to the new "Lake Stage" at Navy Pier in Chicago where Native American drummers were warming up for their performance which would begin at 11:00 AM. Chicago's Navy Pier was celebrating it's 101st birthday. Native American Drumming & Dancing by Seven Springs led off a busy day of fun events. 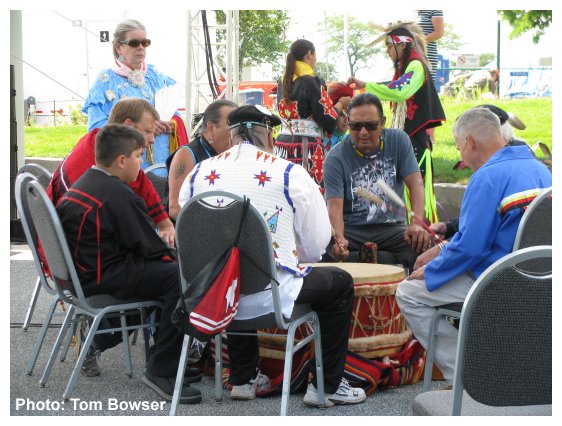 Native American dancers including world champion Fancy Dancer Larry Yazzie performed after the drummers. Larry Yazzie is also an accomplished musician. He demonstrated his skill on the Native American wooden flute. The song he played had a mournful, haunting feel. The wooden flute Larry played was about 2 and 1/2 feet long. It had a rich, mellow tone. Click on an image below to see a larger version.


Larry Yazzie's Eagle Dance was unique and beautiful. His outfit included hand made wings adorned with eagle feathers. Larry soared effortlessly from the stage to within the audience where he gracefully flapped his arms/wings occasionally swaying from the left then to the right. Larry's facial expressions and the look in his eyes as he moved his arms/wings left me with the impression that he had assimilated the spirit of the eagle.

Larry Yazzie invited members of the audience to join him on Navy Pier's new Lake Stage to learn some of the basic dance moves he uses. A surprisingly large number of people (including myself) got on stage to learn some basics. After the dance lessons I concluded that Larry must be in very good physical shape! Everyone had lots of fun.