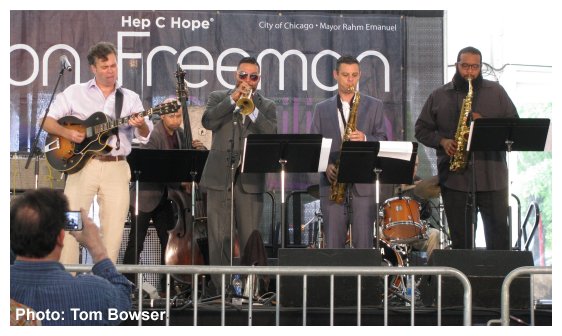 Tim stated that much of the days performance would be in tribute to the late jazz guitarist Wes Montgomery. Tim explained that Wes Montgomery was one of his primary musical influences as a guitarist. Tim Fitzgerald is not a Wes Montgomery clone. He brings his own lyrical interpretations to classic Wes Montgomery tunes. Tim Fitzgerald's enthusiasm is infectious and draws listeners into his musical world. Any music fan would have found something to enjoy in the music that flowed from the stage. Click on any smaller image to see a larger version.

The horn and saxophone parts were precisely played and nicely arranged. Trumpet and flugelhorn player Victor Garcia incorporates a high level of intensity into his playing that few horn players can match. It was the first time I had seen alto saxophonist Rajiv Halim play. His solos were polished and articulate. I hope to see him play again in the future. Lastly, Chris Madsen on tenor saxophone drew the three players together into a cohesive unit. Chris Madsen's playing was spontaneous and engaging. 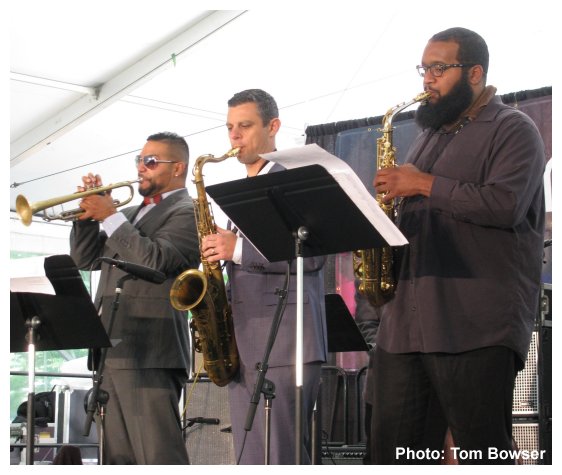 Pianist Tom Vaitsas expanded and added depth and nuanced complexity to the bands overall sound. Tom's playing was superb. Unfortunately the grand piano he played was positioned so that his back was facing the audience. It was rarely possible to see his face as he played.


One of my favorite Chicago drummers George Fludas and bassist Christian Dillingham formed a sold core upon which the other members of the band could build and flourish. George Fludas is one of the hardest working drummers in Chicago. I see him everywhere playing with the best jazz and blues bands and musicians in Chicago. He elevates the sound of every ensemble he plays with. George is not only a great technician, but has a finely tuned instinct of where he belongs in the music at every moment. His understanding of what and when to play makes him a standout among drummers. 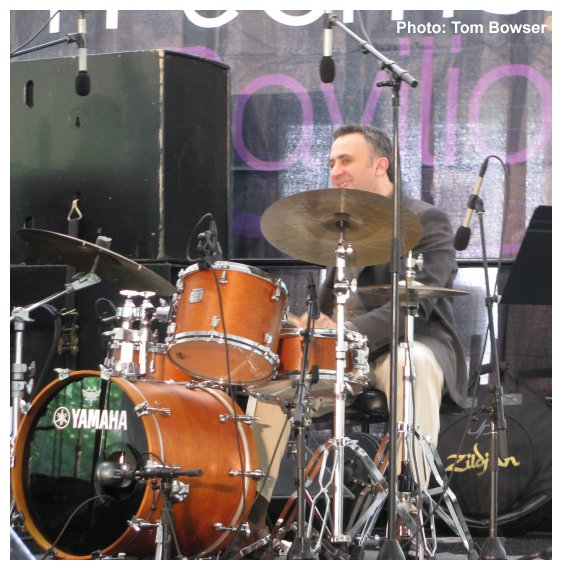 
Note from Tom: A Flugelhorn looks similar to a trumpet, but is a bit larger. It often has a darker and sometimes deeper, mellower sound than a trumpet. The multiple Grammy winning jazz artist Chuck Mangione popularized its use.


The Chicago Jazz Festival is produced by the Department of Cultural Affairs & Special Events (DCASE) and programmed by the Jazz Institute of Chicago.