Ragamala is a free special event that occurs annually as part of Chicago's Free World Music Festival. Ragamala featured 12 hours of Indian classical music beginning at 8:00pm and ending at 8:00am the following day. It is an incredible opportunity to hear talented musicians play a variety of Indian music styles and instruments.

Ragamala was held in the beautiful Preston Bradley Hall at the Chicago Cultural Center. Preston Bradley Hall is a nice room for this event. The rooms lights were dimmed creating a relaxed, meditative feel. The beautiful Tiffany glass dome was a perfect compliment to the exotic instruments and clothing of the musicians. The music was produced at a comfortable listening level. 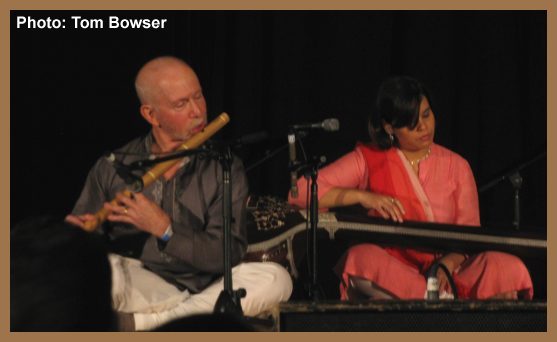 I've been a long time fan of Indian violinist L. Shankar. One of the violins L. Shankar plays is a one of a kind, custom designed, double necked electric violin. This was the first time I've seen Indian music performed live. I found the music, instruments and musicians fascinating. The musicianship was impeccable.

Chicago native Lyon Leifer opened Ragamala, 2015 playing a flute made of bamboo called the Bansuri. Subhasis Mukherjee played with him on a pair of small drums he played with his hands called Tabla. Ms. Shruti Joshi played a rather large, droning instrument called the Tambura. It appeared to keep time for the musicians. I was transfixed by the skill and various techniques required to play each instrument. If you have not experienced Indian music Ragamala is the perfect opportunity.

Unfortunately my wife and I had to get up early the following day. We stayed for the first event only. We both wished we could have stayed longer.

Lyon Leifer is also an accomplished Western classical musician who plays the flute. Visit his Web site for more information and upcoming performances.